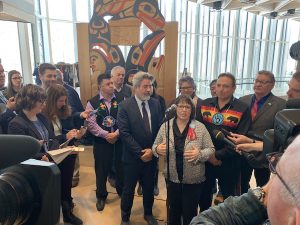 Minister Dal Col (center) addresses the media on Indigenous Languages Bill, Minister Rodriguez (left), and AFN NC Bellegarde (right)  February 5, 2019 (Ottawa, ON) – The Métis Nation welcomes the legislation introduced today in the House of Commons and the effect it will have on the protection and promotion of the Michif language, the national language of the Métis people and Nation.

“The bill marks a giant first step in Canada’s support for our longstanding struggle to preserve, revitalize and promote the use of Michif which has been the most neglected of Canada’s Indigenous languages,” said Métis Nation Minister of Heritage and Culture Clara Morin dal Col. “I wish to commend the Government of Canada for enabling the Métis Nation to participate in the co-development of this legislation.”

Language and culture are among the priorities of the Canada-Métis Nation Accord which the Métis Nation leadership signed with the Prime Minister in 2017 toward the renewal of the Métis Nation-Crown relationship on a nation-to-nation, government-to-government basis.

“We salute the Prime Minister for acting on this priority,” said Métis Nation President Clément Chartier. “The bill recognizes that the rights related to Indigenous languages are among the rights recognized and affirmed by section 35 of the Constitution Act 1982 so this is reconciliation in action.”

Read the full story and watch the videos here:  http://www.metisnation.ca/index.php/news/metis-nation-supports-indigenous-languages-act