It was a gratifying evening on November 23, 2019, when the Métis Nation-Saskatchewan presented three deserving individuals with Métis Star Blankets.  The event took place at the MNLA’s Saturday banquet, held at Prairieland Park.

Merelda Fiddler-Potter is a doctoral student at the Johnson Shoyama Graduate School of Public Policy in Regina and one of this year’s Vanier Canada Graduate Scholarship recipients.

A beaming President Glen McCallum was joined on stage by Dr. Adam McInnes, president of the Saskatoon Métis Local 126 and Minister of Batoche Sherry McLennan to help gift a blanket to Fiddler-Potter.  As it turns out, Dr. McInnes is the only other Saskatchewan recipient of a Vanier scholarship this year. “Because of her work and telling her (Métis) story, it helped to inspire me to learn about who I am, and it helped eventually to lead me to where I am today, including having a seat at the MNLA,” Dr. McInnes remarked.

“I’m just so very humbled and grateful,” said Fiddler-Potter of the recognition.

President McCallum also presented Senator Elder Nora Cummings with a blanket over the weekend.  Among the author and mentor’s many achievements and accolades, author Senator Cummings was a founding member of the Saskatoon Métis Society local #11 in 1969 and was bestowed the honour of the Queen’s Golden Jubilee Award for her services to Canada in 2002.

Blanket recipient Senator Clayton Ward is a man who never backs down from a Métis cause.  “As far back as I can remember, he was always involved,” said sister-in-law Jean Roussi, adding that even when grappling with deteriorating health, “if he can go to a meeting, he’ll go.” A past president of the Yorkton Métis local, Senator Ward is credited with leading the charge that resulted in the homecoming event at the former Crescent Lake Métis Settlement taking place every year.

The evening was a tremendous success and an incredible way to mark another productive gathering of the Métis Nation-Saskatchewan Legislative Assembly. 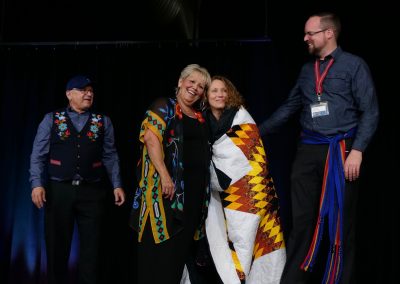 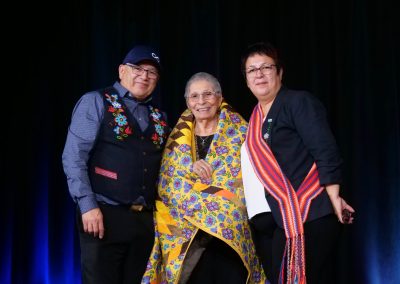