“We continue to work hard to register our people…”
President McCallum discusses the importance of the Métis Nation – Saskatchewan Citizenship Registry.

Register today for the Mobile Intake Session in Indian Head at the Heritage Club on Saturday, January 18, 2020 from 10:00 AM – 3:00 PM.  Download instructions here.

Register today for the Mobile Intake Session in Spiritwood at the Legion Hall, Saturday, December 7 from 11:00am to 6:00pm. 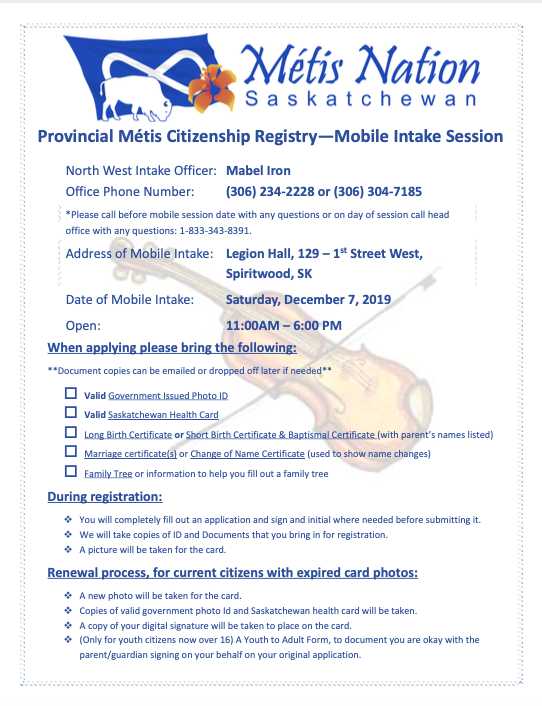 Register today for the Mobile Intake Session in Glaslyn at the Elk’s Hall on Main Street, Saturday, December 14 from 12:00pm to 6:00pm. Download instructions here.

Register today for the Mobile Intake Session in Regina at Winston Knoll Collegiate, 5255 Rochdale Boulevard on Thursday, December 12 from 11:00am to 1:30pm. Download instructions here.

Register today for the Mobile Intake Session in Beauval at the CIPI Radio Station on Lavoie Street, Wednesday, December 4 from 1:00pm to 4:00pm. Download instructions here.

Register today for the Mobile Intake Session in Pinehouse at the Pinehouse Lake School on Tuesday, December 3 from 1:00pm to 3:00pm. Download the instructions here.

The assembly debated several important motions related primarily to matters of core governance and process. These included motions on roles and responsibilities of specific elected offices, the process to elect representatives for Métis women and youth, and requirements for citizenship prior to standing for election.

Several important motions were passed including:

The Honorable Carolyn Bennett, Minster of Crown – Indigenous Relations attended the Legislative Assembly for the first time. The Minister conferred with delegates, addressed the assembly, and was gifted a handcrafted beaded shawl to thank her for her long-standing support of the Métis Nation – Saskatchewan and Métis rights and self-determination.

The complete video from the MNLA, along with certified resolutions and other supporting documents, will be available at métisnationsk.com later this week.

Quotes:
“It was an honour to attend the Métis Nation-Saskatchewan Legislative Assembly.  It is so impressive to witness true democracy in action- the workshops, the open meetings, the focus on youth and the passion and commitment of President McCallum and all the leadership.
Today, we celebrated how far we have come together. The Métis Government Recognition and Self-Government agreement has set the stage to formally recognize the Métis Nation of Saskatchewan as an Indigenous government.
We continue to work hard together to undo the harms of the past. We look forward to working together to support the vision and priorities of Métis citizens.”
The Honorable Carolyn Bennett, Minister of Crown – Indigenous Relations

“Every meeting of the Legislative Assembly marks an important day for the Métis of Saskatchewan. It serves as a reminder of the duties that come from self-government and living up to the dreams of our leader Louis Riel.  We will work to address the needs of Métis people across the province and support our dreams and ambitions.
This meeting of the assembly is another step in realizing the dreams of our people, our past leaders, and our ancestors who held fast to the vision that one day a Métis government would arise in Saskatchewan. It has taken time. It has sometimes been hard. But we are rising stronger with each day.
It was a pleasure to welcome the Honourable Minister Bennett and her continued support as we work toward reconciliation. I would like to thank our Speaker, our Executive, our Elected officials, our Staff, and our citizenry who attended in person and by the live feed for their efforts and participation. It has been very good to be here for the last three days to listen to our citizens.”
President Glen McCallum, Métis Nation – Saskatchewan

LIVE STREAM
Métis Nation – Saskatchewan
This webcast has ended. A complete video of the Fall 2019 Legislative Assembly will be available in The Library as soon as possible.